I’ve Lost A Lot of Weight! 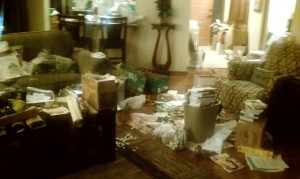 During the Weight Loss Program!

I’ve often joked that I lost about 180 pounds after my divorce, but we all know what that means! It was definitely a weight off my

shoulders—and my mind—a shedding of the person as well as the idea of what he represented. Well, I’ve been on a similar mission lately, although this time, my “weight loss” program is about clearing out “stuff.” And, most importantly, what that stuff represents. This time, I’ve lost thousands of pounds!

The fuzzy picture at right is part of the mess that ensued when I pulled out all the boxes from the closets and unloaded the 10 x 20 storage room into my condo. There’s another hallway to the right that you can’t see in the photo that was also stacked high. So were both of my bedrooms. It was a mess! Yes, there’s an “after” photo below.

Now, we all know that stuff can wind up owning you rather you owning it. Well, this stuff has owned me for over ten years and it has weighed me down in more ways than poundage. It also cost me much more than the boatload of money I’ve spent to move it across three states and store in five storage rooms. It’s cost me peace.

I’ve gotten rid of tons of stuff over the last few years, but there was still so much left to deal with. Part of me never wanted to see any of it ever again. Another part was terrified of who I would be without it. That stuff not only owned me, it had also somehow defined me.

As I went through the process of letting go of stuff, I asked myself all kinds of questions, such as, why was I keeping it? If there was a fire, would I replace it? Those are great questions for basic things and they really do help. For family and sentimental stuff, I had to dig a little deeper. What would happen if I got rid of it? Who would be mad at me? Would I be sorry later? Was I bad person for wanting rid of it? Why?

It was hard for me to get rid of the family stuff I’d been carrying around for over thirty years. And as I wrote the words “very heavy” on the top of one box, I knew I was referring to more than poundage. That particular box held the only family photos and memorabilia that I had kept. I’d condensed down from five plastic totes of photo albums and eight boxes of keepsakes to just that one box, and yet, it was still too heavy.

There were a lot of things I’d been saving for my children—in spite of the fact that they’d told me they didn’t want any of it. Was I thinking they’d change their minds later and blame me for not having it? Or, was I trying to “should” all over them as I had been and guilt them into taking it?

I did not like either one of those questions, so back I went through the stuff yet again. This time, when I paused or felt a twinge, I asked why. Why was I keeping it? When the answer was obligation, guilt or some version of “that’s what good girls/mothers do,” I got rid of it. And, funny thing, not only did the box get lighter, so did I. I felt freer. Empowered. 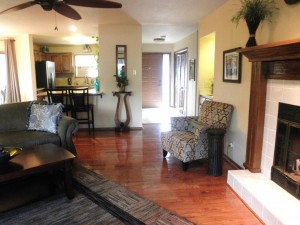 I didn’t throw everything away. I’ve mailed and shipped stuff all over the country to various people for various reasons. I’m also taking a carload of stuff to Texas so my last living aunt can give it to her daughters, grandchildren and great-grandchildren as she sees fit. They are all thrilled to get the quilts my grandmother made, the old photos and other historic memorabilia, and I am thrilled to be free of them. That doesn’t mean I don’t love my mother or grandmother, it just means I don’t need to keep those things to prove it anymore. It also gives me a great excuse to go see two people I care about very much, which is way better than keeping old pictures of them.

So, yes, I’ve lost weight in so many ways. It literally feels like a thousand pounds have lifted from my shoulders—and my mind. In the physical world, I’ve probably dropped over five thousand. And the great thing is, that clearing out the stuff helped move forward in clearing out the bigger issue of why I was hanging on to it.

So, take a look around at all the stuff. Is it there because you really want it? Need it? Love it? Enjoy it? Use it? Or, are there other reasons you’re keeping it? The answers to those questions might amaze you—and make it easy for you to lose a lot of weight too. Yes, even the body kind.

Take your life back! You’ve been feeling it for a while, that pressure, that weight of the world on your shoulders, and you just haven’t found a way to get free and get moving. That’s exactly why I wrote Living the Life You Love—to give you way out of the confusion and turmoil and into clarity and peace. Get your print or ebook copy now and get started! And, if you want to move along even faster, we can work together in private coaching sessions to laser focus down to the heart of your problem and clear the fog so you can see solutions. Email me with questions! paula@paularenaye.com

If you missed my on-air visit with the dynamic and amazing motivational speaker and coach Renee’ Ruiz on her LA Talk Radio show, Passion and Purpose, you can still listen or download it! We shared a lot of great tips so check it out! http://www.latalkradio.com/Passion.php

Living the Life You Love is now in bookstores across Mexico! The publisher is sending me a link where the Spanish version can be purchased, and I will post that on my website and Facebook pages as soon as I get it.

English version available from amazon.com, bn.com and many other retailers worldwide. Get yours now!